The 145th Kentucky Derby - "The Greatest Two Minutes In Sports"

The Kentucky Derby is a stakes race for three-year-old thoroughbred horses, staged yearly in Louisville, Kentucky on the first Saturday in May, capping the two-week-long Kentucky Derby Festival. The race currently covers one and one-quarter miles (2.012 km) at Churchill Downs; colts and geldings carry 126 pounds (57 kg), fillies 121.

Organized horse racing in the State of Kentucky dates as far back as the late 1700s when several different race courses were built in and around the city of Louisville. In 1872, Col. M. Lewis Clark, traveled to England, visiting the Epsom Derby, a famous race that had been running annually since 1780. From there, Clark went on to Paris, France, where in 1863 a group of racing enthusiasts had formed the French Jockey Club and had organized the Grand Prix de Paris, which eventually became the famous Prix de l'Arc de Triomphe.

Returning home to Kentucky, Clark organized the Louisville Jockey Club for the purpose of raising money to build quality racing facilities just outside of the city. The track would soon become known as Churchill Downs, named for Lewis Clark's relatives, John and Henry Churchill, who had provided the land for the racetrack. Officially, the racetrack was incorporated as Churchill Downs in 1937.

The Kentucky Derby was first run at 1-1/2 miles, the same distance as the Epsom Derby and the Grand Prix de Paris. In 1896 the distance was changed to its current 1-1/4 miles. On May 17, 1875, in front of an estimated crowd of 10,000 people, a field of 15 three-year-old horses contested the first Derby. Under African-American jockey Oliver Lewis, a colt named Aristides who was trained by future Hall of Famer, Ansel Williamson, won the inaugural Derby. Later that year, Lewis rode Aristides to a second-place finish in the Belmont Stakes.

Although the first race meet proved a success, the track ran into financial difficulties and in 1894 the New Louisville Jockey Club was incorporated with new capitalization and improved facilities. Despite this, the business floundered until 1902 when Col. Matt Winn of Louisville put together a syndicate of businessmen to acquire the facility. Under Winn, Churchill Downs prospered and the Kentucky Derby became the preeminent thoroughbred horse race in America.

Besides the consumption of the Mint Julep drink, other traditions have played a large role in the Derby atmosphere, with elegant women appearing in long dresses, big hats, and carrying fancy umbrellas.

The Derby is frequently referred to as "The run for the roses," because a garland of red roses is awarded to the Kentucky Derby winner each year. The tradition is as a result of New York socialite E. Berry Wall presenting roses to ladies at a post-Derby party in 1883 that was attended by Churchill Downs president, Col. M. Lewis Clark. This gesture is believed to have eventually led Clark to the idea of making the rose the race's official flower. However, it wasn't until 1896 that any recorded account referred to roses being draped on the Derby winner.

The 1904 race was won by Elwood, the first Derby starter and winner to be owned by a woman, Laska Durnell.

The 2004 Derby marked the first time that jockeys, as a result of a court order, were allowed to wear corporate advertising logos on their clothing.

As part of gaining income, horse owners began sending their successful Derby horses to compete a few weeks later in the Preakness Stakes at the Pimlico Race Course, in Baltimore, Maryland, followed by the Belmont Stakes in Elmont, New York. The three races offered the largest purse and in 1919 Sir Barton became the first horse to win all three races. However, the term Triple Crown didn't come into use until for another eleven years. In 1930, when Gallant Fox became the second horse to win all three races, sportswriter Charles Hatton brought the phrase into American usage. Fueled by the media, public interest in the possibility of a "superhorse" that could win the Triple Crown began in the weeks leading up to the Derby. Two years after the term was coined, the race, which had been run in mid-May since inception, was changed to the first Saturday in May to allow for a specific schedule for the Triple Crown races. 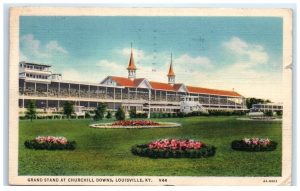